STORIES OF THE REDLANDS is  a permanent display in the Rotary Wing and was  opened by the newly appointed  Governor of Queensland, PENNY WENSLEY, on Wednesday, 13th May, 2009. Redland City Mayor, MELVA HOBSON, was also in attendance.  It tells the story of the Redlands from  180,000 years ago when the islands were first formed, to 2009. This is done  in many different ways: 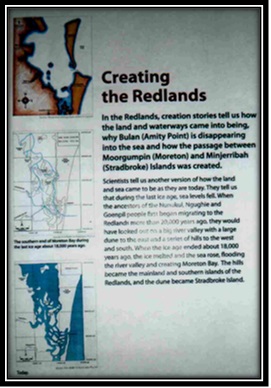 (shown on the left), a leadlight window dated 1900,  the 1875 Fresnel lens fitted into  the 1864 Cleveland Light House in 1879 farm stencils, the double bottom copper boiler  used in the production of Queensland’s first commercial sugar mill installed in 1864 at  Ormiston on Louis Hope’s property.

There is also the shovel used by Minister for Health, Brian Austin, on 12th August, 1986, to turn the first sod  of Redland Hospital in Weippin Street, Cleveland. Another very interesting item is a framed photo of the first Cleveland Show Society Committee. This features 18 men and one sole lady, Ethel Maud Dean. Also interesting is  a “scare all” carbide gun which was used on an orchard in Birkdale during the 1950s and 1960s. Its purpose was to scare crows and parrots from the crops. The constant boom from these guns could be heard all over the farming communities of the Redlands and from the Bay.

After the exhibition was opened on 13th May, 2009,  all seven  videos in it run all day. These show various scenes of life in the Redlands.In fact, the entire exhibition offers a wonderful opportunity to learn and appreciate the development of the Redlands over the past  180,000+ years!  For students researching and studying the history of the local area, it is an excellent resource.

To the left we see the leadlight window, installed by our Museum President, Ross Bower. At right we see Heather Smith with the 1875 Fresnel lens, which was fitted to the 1864 Light House in 1879.